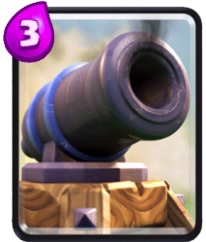 The Canon is a building card that is available from Arena 3. At cost of 3 Elixir, it attacks with hit speed of 0.8 seconds within range of 5.5 attacking only ground troops. The Canon has a lifetime of 30 seconds, and at Level 1 has around 400 hitpoints, doing 60 tower damage and 75 damage per second and its highest upgrade goes up to 1236 hitpoins, doing 185 tower damage and 231 damage per second. The Canon`s main purpose is defending the Towers, so if you place it behind the Tower and combined with the X-Bow or the Inferno Tower, can handle high hitpoint troops. Since its target is ground troops, the Canon can be destroyed by Minions of Minion Horde. Due to the cheap cost, it is a good option for distracting the enemy’s troops off the Towers. Clash Royale describes the Cannon as: “Defensive building. Shoots cannonballs with deadly effect, but cannot target flying troops.”