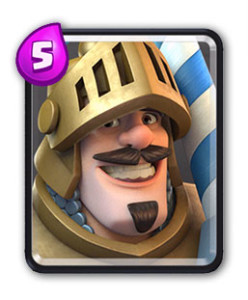 The knight is considered a good card for both offense and defense. It can be used as a front warrior combined with smaller troops. It hits only one target a t a time and it can be easily distracted. When the knight gets killed, his sword stays buried at the arena.

Clash Royale describes the knight as: “A tough melee fighter. The Barbarian`s handsome, cultured cousin. Rumor has it that he was knighted based on the sheer awesomeness of his mustache alone.”