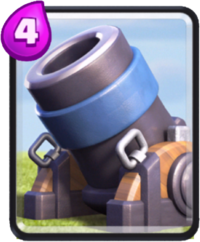 The Mortar is a building card available from Arena 6. It starts with 600 hitpoints, 108 area damage and 21 damage per second, and is upgraded up to 1854 hitpoints, 333 are damage and 66 damage per second. Its main target is ground and attacks within 4.5-11 range. The cost for the Mortar is 4 Elixir and its lifetime is 30 seconds. The Mortar can be placed near the Crown Tower, so it can target group of troops. This strategy is not working if the troops are too close to the Mortar. Also if placed right, it can target the opposing Towers. During its lifetime, the Mortar fires up 6 shots. It cannot fight troops fast as the Hog Rider and troops with high hitpoints such as the Giant or the Giant Skeleton. Clash Royale describes the Mortar as: “Defensive building with a long range. Shoots exploding shells that deal area damage. Cannot shoot at targets that get very close!”