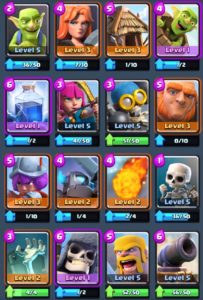 According to the type, and the main characteristics, the cards can be divided into :Troop Cards, Building Cards and Spell Cards.

The Cards can be divided by the speed, so there are :slow Cards, Cards with medium speed, fast Cards and very fast Cards.

We can go on with the categories of Cards, but you must remember that each Card in Clash Royale has its own purpose and mission, so combined together in a deck of 8 Cards, they can do miracles:).

We divided the Cars according to their rarity: