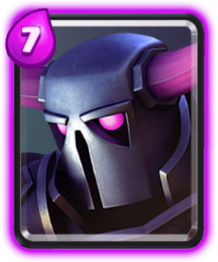 The P.E.K.K.A is a single target troop that is unlocked from the P.E.K.K.A Playhouse. If you place it in the right place at the right time, it can be unbeatable. It starts with 2600 hitpoints, 450 damage per hit and 250 damage per second, and is upgraded up to 5018 hitpoints, 868 damage per hit and 482 damage per second. The cost for the P.E.K.K.A is 7 Elixir. The deploy time is 3 seconds and it moves very slow, so you better get a good backup if you want it to get as far as possible. Its main target is ground and attacks at melee range. The P.E.K.K.A must be combined with other troops if you want it to survive to greater purposes and goals. The Rage spell increases its movement and attacks. Regardless, the P.E.K.K.A seems to have more enemies than backup buddies. Taking in consideration its high elixir cost, it can easily be destroyed by the Skeleton Army or the Barbarians, unless the opponent manage to pull off the Arrows or the Fireball. The mini P.E.K.K.A is also very effective against it, because of its speed and high hitpoints. The P.E.K.K.A is good to go against the Giant and the Giant Skeleton, but is too slow for the Inferno Tower. Clash Royale describes the P.E.K.K.A as:” A heavily armored, slow melee fighter. Swings from the hit but packs a huge punch.”