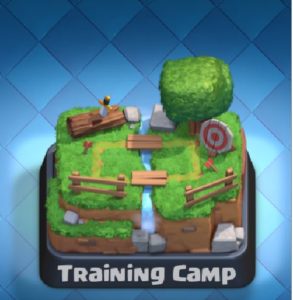 The Training Camp also known as the Tutorial is the first Arena introduced to the Clash Royale players.The Training Camp is a battlefield where the players learn the basics of the game, the purpose of the Gems and the Gold, opening Chest etc. when starting the first battle, the player has six cards in his deck: Archers, Arrows, Bomber,Fireball, Giant and Knight. Another cards unlocked in the Training Camp are the mini P.E.K.K.A, the Musketeer, the Prince, the Baby Dragon, the Skeleton Army and the Witch.The players can always access the Training Camp, where they can fight against different trainer. According to the trophy level, the game chooses different trainers. For example, the trainer Sneezy fights against 2400+ Trophy players.