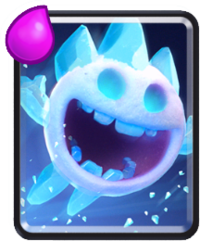 The ice spirit was released in the latest update which included the tournaments alongside other cards such as the lumberjack, the log, and the bowler.The ice spirit is the cheapest card in the game alongside the skeletons, costing only 1 elixir, and keeping in mind its splash damage and a 2 second freezing ability, it certainly is an extremely powerful card with infinite possibilities. It can be used on defense to deal with incoming troops to bring them down by a little health and give your crown tower an additional 2 seconds to deal with them.At level 9  (Tournament Standards) The Ice spirit has 190 hitpoints, 106 Area ( Splash) Damage, with a range of 2.5 tiles and of course the 2 second freeze duration. Now the interesting fact here is that the ice spirit CANNOT take down any troop on  its own, other than skeletons. This has been done to obviously prevent it from being completely overpowered, but since almost everybody will support the ice spirit with some other troop, the ice spirit is a real menace to deal with.

The ice spirit is especially strong against horde of troops, say the minion horde, goblins, spear goblins, and skeletons, due to its decent area damage, with can prove to be extremely useful in gaining the elixir advantage, since countering the minion horde completely using just a 1 elixir card gives you the extra 4 elixir to create a stronger push and wreak the enemy at once.

Against stronger and more heavier troops like the royal giant and the hog rider, the ice spirit can be placed alongside your defensive building ( Preferably Inferno Tower) to freeze it and give you tower the extra 2 seconds needed to finish it off.

One Insanely useful way of using the ice spirits on defense is combining it with a Valkyrie. This can be a deadly combo against troops like the 3 musketeers, with can be completely shut down by doing this. Drop your valkyrie right on them and immediately drop down you ice spirit , which with freeze them , giving the Valkyrie some more time to finish it off. By doing this you will also have a strong base for your push, as the Valkyrie is a very strong tank.

The ice spirit is an equally versatile card on offense with infinite possibilities. The fact that it costs 1 elixir gives you no reason not to take the risk and just use it in combination with your other troops.

One of the best combinations of the ice spirit is with the hog rider. The hog rider can be sent with the ice spirit and the princess- The ice spirit with freeze whatever comes in its path and the princess will finish it. If no troops are drooped but a building, say a cannon,  then your hog will crush his way into the arena tower with near full health, and if you have a zap in hand you could use it to give your hog an extra 1 second to grind through the tower.

The second combination is with the royal giant. The Royal Giant is already OP and combining it with minions and ice spirits will be absolutely deadly.

The giant + ice spirit + minions+ witch can be a deadly combo as well. The ice spirits will freeze the inferno tower giving your giant and other troops 2 more seconds to finish it off and that will absolutely wreak the tower unless your opponent has a level 20 rocket with a range equal to that of arrows.