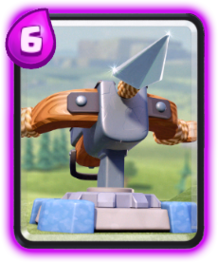 The X-Bow is a building card available from Arena 3. It targets only ground troops within range of 11.5. It has lifetime of 40 seconds and starts with 850 hitpoints, 20 tower damage and 66 damage per second and is upgraded up to 1640 hitpoints, 38 tower damage and 126 damage per second. At cost of 6 Elixir, you can use the X-Bow for attacking your opponent or defending your own territory. From all the building cards, it is the only one that is epic, with a deploy time of long 5 seconds, regardless it has hit speed of 0.3 seconds which is the fastest hit speed of all cards. If the X-Bow is placed close to the river, it can target the Towers. It can handle easily troops with low hitpoints such as the Goblins, but can be destroyed by air troops such as the Minions. Combined with The Giant it can distract enemy’s troops attention, so the X-Bow can focus attacking the Tower. Clash Royale describes the X-Bow as: “Nice Tower you got there. Would be a shame if this X-Bow whittled it down from this side of the arena…”