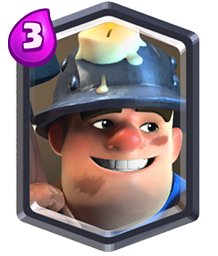 The Miner is a troop card available from Arena 6. He is among the fast troops with hit speed of 1.2 seconds. Its main target are buildings and he attacks them within melee range. The Miner starts with 1000 hitpoints, 160 damage, 133 damage per second and 64 crown damage, and is upgraded up to 1460 hitpoints, 233 damage, 194 damage per second and 94 crown tower damage. Since the Miner can be drawn anywhere in the Arena, he can really surprise the opponent. He is mainly used for attacking building cards that are placed to protect the Tower. The Miner is fragile to group troops. Clash Royale says: “The Miner can burrow his way underground and appear anywhere in the Arena. It’s not magic, it’s a shovel.”