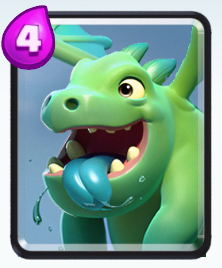 The Baby Dragon is a troop card unlocked right after Training Camp, and you`ll be really lucky to get it because there are only a few threats for it, since at Arena 2 all the cards are at very low level. It starts with 800 hitpoints, 100 area damage and 55 damage per second, and is upgraded up to 1544 hitpoints, 193 area damage and 107 damage per second. The Baby Dragon is fast, with 1 sec deploy time and 1.8 sec hit speed. The cost for the Baby Dragon is 4 elixirs, and it attacks both air and ground, at 3.5 range. It goes very well with the Giant and the Giant skeleton, but it can be also combined with smaller troops such as the Spear Goblins. The Baby Dragon itself cannot deal a lot of damage, so the players should consider combining it with some other cards. However, the Baby Dragon is a good card for battle at the lowest levels, because at highest levels, the Towers are becoming so strong, that only one raffle from the Tower can destroy the Baby Dragon, without taking any damage. Clash Royale describes the Baby Dragon as: “Flying troop that deals area damage. Baby Dragon hatch cute, hungry and ready for a barbecue.”