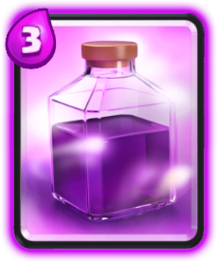 The Rage is a spell card available from Arena 3. At cost of 3 Elixir, the Rage spell starts with 8 seconds and is leveled up to 11.5 seconds. The Rage attacks in radius 5, which is the largest radius of all the spell cards in Clash Royale. The main purpose of the Rage is to increase the speed of the movement ant attacks of the slower troops. It can also make fast troops attack even faster and take down a Tower easily. Clash Royale describes the Rage as: “Increases troop movement and attack speed by 40%. Troop buildings and summoners deploy troops faster.Chaaarge!”