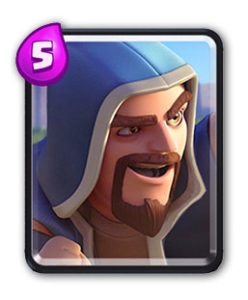 The Wizard is a troop card available from Arena 5. With medium movement speed and 1.7 seconds hit speed, the Wizard targets both air and ground troops within 5 range. The cost for the Wizard is 5 Elixir. It starts with 340 hitpoints, 130 area damage and 77 damage per second, and is upgraded up to 870 hitpoints, 332 area damage and 195 damage per second. The Wizard is a leveled up Bomber, so he is usually combined with troops with high hit points such as the Giant Skeleton. If out of Minions, the Wizard is very effective in defeating the Balloon. The Wizard is fragile to spell cards, such as the Fireball, but can also be defeated by the Barbarians and other group troops. Clash Royale says: “The most awesome man to ever set foot in the arena, the Wizard will blow you away with his handsomeness… and/or fireballs.”