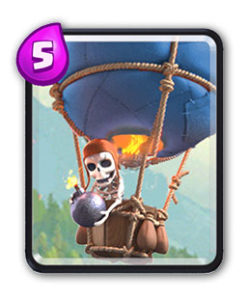 The Balloon is a troop card available from Arena 2. At level 1, it starts with 1050 hitpoints, 600 damage per hit, 200 damage per second and 100 death damage, and is upgraded up to 2026 hitpoints, 1158 damage per hit, 386 damage per second and 193 death damage. With medium speed and deploy time of 1 second, the Balloon attacks within melee range, and its main target are buildings. The cost for the Balloon is 5 Elixir. The Balloon is very effective combined with the Rage spell. It enables the Balloon to het faster to the tower, and can handle a lot of damage, maybe even destroying the Tower. Since its main target are Buildings, the Balloon must be backed up with other troops, such as Spear Goblins or Minions. On the other hand, the Minions are Balloons enemy. It can be distracted with the Inferno Tower or some other building available in your deck. The Freeze Spell can also be used against the Balloon. It can immediately disable the Balloon moving toward the towers. Clash Royale describes the Balloon as: “As pretty as they are, you won`t want a parade of THESE balloons showing up on the horizon. Drops powerful bombs and when shot down, crashes dealing are damage.”