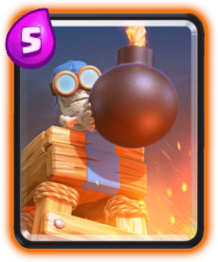 The Bomb Tower is a building card available from Arena 2. With lifetime of 40 seconds, the Bomb Tower attacks only ground targets within 6 range and hit speed of 1.6 seconds. The cost for the Bomb Tower is 5 Elixir, and can be played to defend the Towers of the enemies group troops or as a distraction for the troops with high hitpoints. It starts with 900 hitpoints, 100 area damage and 58 damage per second, and is upgraded up to 2304 hitpoints, 256 area damage and 160 damage per second. Since it cannot attack flying troops, it can be easily destroyed by the Minions or Minion Horde. If you are playing defensive strategy, you can combine it with the Inferno Tower or the Tesla, so it can prevent the air troops to destroy the Bomb Tower. Clash Royale describes the Bomb Tower as: “Defensive building that houses a Bomber. Deals area damage to anything dumb enough to stand near it.”