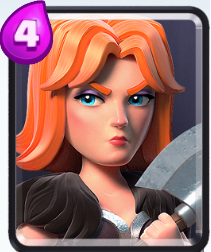 The Valkyrie is a troop card available from the Goblin Stadium. With cost of 4 Elixir and deploy time of 1 sec, the Valkyrie targets the ground enemies within a melee range. She has a medium speed and hit speed of 1.5 sec. The Valkyrie is famous for her hitpoints, which at level 1 are 880, making 120 area damage and 80 damage per second. At Level 10, which is the highest level the Valkyrie is upgraded to, the hitpoints are increased up to 2050, with 279 area damage and 186 damage per second. There are many ways to use the Valkyrie, since she makes a lot of damage. She makes the Skeleton Army disappears in a second. She is also very dangerous combined with the Prince, the mini P.E.K.K.A and the Giant. She handles the smaller troops, while the card with higher health moves along to the towers. In a way, she clears the path for them. Clash Royale describes the Valkyrie as: “Though melee fighter, deals area damage around her. Swarm or horde, no problem! She can take them all out with a few spins.”