This deck is one of my friends in my clan.  He says that it works very well and usually catches people by surprise.  This surprise can help you get one tower down withing the first minute of the battle.  Currently, he is a level ten at around 3600 trophies.  This shows that this deck is very good.  He said that this deck is good for pushing so you will definitely see more wins than loses.  Finally, he said that since it is an unusual deck, he loves seeing his opponents panic and make stupid errors.  Some of the errors included placing a cannon instead of arrows, missing a goblin or two when they used arrows or a fireball, and slow reaction time that costed them half their tower.  The last mistake was shown quite often in the replays that he shared.  It also is fun to mess around with the miner and goblin barrel overall.  Their animations are quite visually exciting if I do say so myself.  This is also an offensive deck which, in my opinion, is more fun than a defensive one.  If you like to be constantly on the attack, make your opponent constantly on their heels, and always apply the pressure, this deck is perfect for you.  However, if you are either a free to play player or a person that doesn’t spend a lot of money on mobile video games, this may not be the deck for you since it uses epic and legionaries.  Not being able to spend a good amount of money will leave you behind on upgrades ion the epic and legendary cards you use in this deck.  Unfortunately I cannot test this deck out for you guys as I don not have the princess or miner.  Saying that, I can assure you that this deck still performs at a top notch rate all the way up to 3600 trophies.  As of the May 18th update, none of these cards are being nerfed.

The average elixir cost for this deck is 3.4 and contains the following cards:

Princess– The princess is key in this deck, although it can be switched out for your fireball.  This is an anti swarm card that can take care of minions, minion horde, barbarians, and any type of goblins.  Fireballs can also do all of these things but a princess can do more damage over time.  You should save your princess for two different reasons.  The first is to let you kill any of the previously stated troops because if you do not have her you won’t be able to use the best counter.  Barbarians would also help stop the majority of pushes if your princess isn’t in your hand.  The second reason is to draw out your opponent’s arrows or fireball.  This will let you send your miner goblin barrel freely and let it cause mayhem through areal and underground means.  This card may come hard to obtain through free to play users so this deck would be not as effective with players who do not have this card.

Minions– This deck uses the Minions instead of the Minion Horde.  The Minions are preferred in this deck over the Minion Horde because you want to keep the cost of troops low.  By keeping the cost low, you will be able to cycle through your cards faster.  The Minions also do well enough against air troops like the Balloon or Baby Dragon, although for the Baby Dragon needs to target your Crown Tower first.  Minions also can take out the Barbarians with the help of the Spear Goblins.  This leaves you with a major counter push at the ready.  Also, these blue little monsters can help destroy Prince rushes with the help of some ground troops.  Even if your enemy uses Arrows, you are not at a Elixir disadvantage, unlike the Minion Horde.  The Minions could also kill a Sparky before it can take its aim at the Tower.  The Minions can also kill a Princess that is on the bridge.

Miner- The miner is your main troop in this deck.  It is supported by the goblin barrel in your main push and acts as the tank.  This troop is very important and cannot be swapped out with any other common or rare card.  This is the heart and soul of this deceitful strategy.  When deploying, you want to make sure that the miner will pop out of the ground before the goblin barrel splits open.  Timing takes practice like and other advance strategy and you may want to get a feel for how the mechanics work in a training match.  The May 18th update is said to but the Miner by 6% so it should make this deck even more powerful.

Spear Goblins–  One of the most basic troops in the game.  For its early unlock at Arena 1, it is surprising how well they perform.  The Spear Goblins not only can defend against goblins, enemy Spear Goblins, and Minions in a on verse one with the help of your Tower, but it can also be used at the very beginning.  If the Spear Goblins are used right at the start, you force your opponent to either react to them by placing a much more expensive troop, leaving an option to have a hard counter ready, or make them just watch those Spear Goblins chip 300 damage off their tower.  300 may not seem like a whole bunch, but do that 2 or three times in a match, and you got yourself 1000 free chip damage.  The Spear Goblins can also kill a Princess that is on the bridge very quickly as long as the princess is distracted.  If the princess is not distracted and you deploy the spear goblins, they will die before they can kill the princess, making you basically waste three elixir. 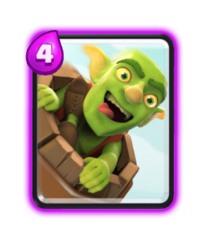 Goblin Barrel-In my opinion, it is a highlight of the deck.  It can easily do 700 damage to a Tower if the opponent can’t react to it.  Also, you can make your opponent waste Elixir with this card.  If you know your opponent has Arrows or a Fireball, off set the barrel’s landing area a little away from the Tower to make them miss entirely.  Paired up with the minions, the tower can take significant damage.  Just be cautions of opponent spells like fireball and arrows because it will give them the elixir advantage.  This is also half of your main pushes.  What yopu want to do is pair up the miner with the gob barrel.  You want the miner to tank for the goblins while they do the majority of the damage.  This combo if left untouched can destroy a tower.  Placement is crucial though.  You want to send the miner in the back side of the tower and the gob barrel on the from side of the tower.  This is so that if your opponents send barbarians to defend against the miner, the goblins still have a few more seconds of attacking before the barbarians can reach them. For the cost of 4 Elixir only, this card can wreck havoc and give
your enemy night mares.  Some combos with this card has also led to great replays and close clutches.

Spells:  Their main uses and how to maximize their potential

The Zap can help counter small troops like Minions, Spear Goblins, Goblins, and even the Minion Horde.  The Zap could also stop a Prince from charging which will reduce his damage immensely.  The Zap, if high enough Level, can also help counter pesky Goblin Barrels the fly across the map and onto your Tower producing a plus two Elixir advantage.  The Zap can also stop an oncoming Hog attack, preventing one to two swings resulting in 500 health points being saved.  Additionally, since the zap is your only spell card, only use it for the events that require it.  Do not waste it on full health barbarians.  The zap can also help you on your main miner goblin barrel push.  If you zap the tower, it can give even more devastation upon your opponent’s tower.  Also, if your opponent counters your main miner goblin barrel push with pear goblins, minions, minion horde, or barbarians, you can zap them along with their tower and cause even more damage before your troops die.  The Zap is a very versatile card that can fit in many situations.