Background Information-  The furnace card can be used in many ways.  The furnace card can spawn small increments of troops at a time but generate a better elixir value when compared to it troop card counter parts, which in some cases is good and in some cases is bad.  The main reason I think this card is underrated is because the furnace is capable of a hug amount of damage.  For only four elixir, it can do over 1000 damage to enemy troops spread out over 50 seconds.  I think it is also under rated because people can use this card to essentially block of a lane from an opponent or fortify defenses to an extreme.  The furnace has some offensive support uses but really shines as a defensive card.  This card can also be used to support or counter the hut spam deck strategy which is pretty unique.

Furnace Arena Unlock-  The furnace is unlocked at Arena Five.  This arena is more commonly known as Spell Factory.  Spell Factory is achieved by getting over 1400 trophies.  Other cards spell factory unlocks is the zap spell, the fire spirits, the wizards, the poison spell, the mirror, and the second unlock able legendary, the wizard.  Of course, like any other card in the game, the poison spell can be unlocked in any arena higher than spell valley.  The furnace can also be earned in Pekkas Playhouse, or Arena Four, by beating a higher level player that is in Arena Five.  This will let you get a chest from Arena Five while still being in Arena Four.

Furnace Stats- The furnace is a rare card so it is a little bit harder to collect and upgrade them than the common cards.  I do not recommend free to play players to try upgrading this card along with other rares and commons to keep a good level count.  The cost of the furnace is four elixir so compared to other cards, it falls into the low to mid cost range.  The furnace has a life time of fifty seconds.  The furnace spawns a pair of fire spirits at a time which helps destroy moderate pushes fairly easily.  It does its damage throughout the period of fifty seconds and the damage is carried in the bodies of the fire spirits it spawns.  A level one furnace spawns two level three fire spirits every ten seconds.  A maxed level furnace spawns two level eleven fire spirits every ten seconds.

Furnace Offensive Tactics- The furnace has some offensive capabilities.  However, this is not like a hog rider where the fire spirits can lead the push.  Rather, the furnace is a card that can help support your pushes.  The fire spirits can be a great addition to your hog rider push or perhaps a golem push.  Even though you only get 2 fire spirits, they can still do a ton of damage.  Two fire spirits can reduce a whole minion horde down to everything but one, single half health minion.  This greatly reduces the damage going on your troops and lets you get a lot more damage on to your enemy’s crown or arena tower.    The furnace can also be used just as a stead supply of chip damage.  With a reasonable level furnace, one fire spirit will always make it to the enemy crown or arena tower.  Since each fire spirit can do a decent amount of damage, your opponent has to keep an eye on this furnace.  If you opponent just leaves that furnace alone and does not try to counter it at all, you will get a lot of damage off onto his or her tower.  The total damage will be around 500 to 1000 damage, quite a lot for only the cost of four elixir.  The furnace can also be used in ahut spam strategy.  The furnace can provide aerial and ground coverage which only the goblin hut can also provide.  It also provides much needed splash damage in the hut spammer deck.  Where as before a hut spammer would be completely destroyed by a minion horde, the furnace, along with the goblin hut, lets you easily counter the minion horde very quickly.

Furnace Defensive Tactics- The furnaces main job, in my opinion, is a defensive one.  The furnace, in my opinion, is a very good card.   Since it is a building, it has many uses.  If you place it behind one of your crown or arena towers, it is very safe and can essentially block off that whole lane.  The reason that it can block off a whole lane is because the two fire spirits do a ton of damage.  If an an enemy tries to push up the lane where your furnace is located, they will probably receive four to six fire spirits during the whole time of their push.  This can be up to eight hundred damage and completely destroy a ton of pushes.  Eight hundred damage will kill barbarians, hog riders, balloons, or prince pushes.  Because of this, you can sort of influence your opponent to push your other side.  A good idea to use the furnace like that is when one of your towers is stronger than the other.  If you place the furnace on the side of the weaker crown or arena tower, you make that weaker side a lot stronger.  The furnace makes a tough decision for your opponent to make to whether attack the weaker side with the furnace, or attack the stronger side with no furnace.  The furnace can also be placed in front of your king’s tower a few squares forward.  This, in an addition of being a spawner building, makes the furnace be able to be a big distraction.  The furnace can distract the hog rider, the giant, the royal giant, the balloon, the golem, and the lava hound.  This can act as a tank for your tower and absorb the damage from troops instead of your own crown or arena tower take the damage.  Both of these defensive strategies are very useful but you should use them in their specific situations.  If they have a hog rider, place it up front.  If one of your towers has 1500 health, place the furnace behind that tower.  After you get to know the furnace, you will know what action is the best to take in any given situation.

Random But Very Interesting Facts and Trivia-This section will have irrelevant information about the tactical use of the poison spell.  However, it may be fun to read these points as they may make you notice some things that you have not experienced yet.  The Furnace can spawn up to twelve Fire Spirits over its lifetime, which would cost eight Elixir to deploy manually, creating a profit of four Elixir.  The Furnace can be used with other spawner buildings to deal high instant splash damage.  Mirroring them can spawn four spirits at a time. Using Golem and Wizard with the two furnaces is very deadly.  If you gather up too many Fire spirits by using cards like mirror, Zap can give your opponent a vast elixir profit.The Furnace is a good counter against spawner decks although ironically it’s a spawner card, due to the fact that the Fire Spirits spawned deal splash damage.   The Furnace is good at supporting counter attacks as it takes out many small troops, such as Minions, Spear Goblins and Goblins, that opponents may play due to being low on Elixir from their attack. Prepared in advance, you won’t have to deal with incoming minions and vice versa, as the spawned fire spirits take care of them on their own.  If you don’t have any other counters, a Furnace can stop a push with low hit point troops since it will immediately spawn at least one Fire Spirit, wiping out a lot of the push and acting as a distraction. 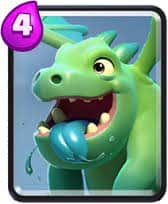