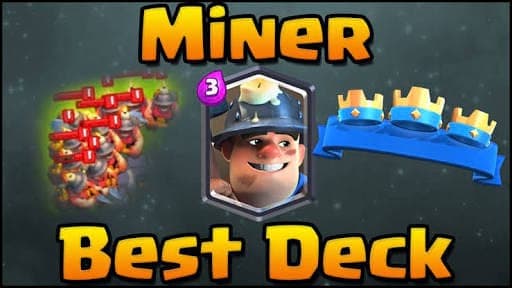 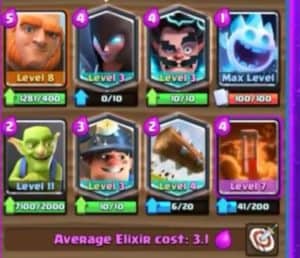 Just some of the comments made about the deck we’re gonna discuss about today. Its a Grand Challenge deck which is extremely Overpowered. It was created by the European CCGS champion, Surgical Goblin, of whom I personally have been a fan. He is not only a skilful player, but also a very humble person with a great ideology. He used this deck in some of his CCGS matches and even 3 crowned an opponent in the latter stages of the tournament. So lets get into it!

The basic idea in this deck is to Build up strong pushes and punish the opponent with heavy pushes when they pump up, because your opponent would be out of elixir at that time.

The deck includes cards like the Electro Wizard, the Miner, The Night Witch, and the Giant, supported by the likes of The Poison, The Ice Spirit, The Log, and the Goblins.

Weakness: The only weakness of this deck is against 3 Musketeers and Heal deck, as the poison would not work in that case, and hence it would be very tough to counter .

Strengths: The Deck is strong against all kinds of decks, From Hog To Golem to Miner. Even against the 3 Musks it will perform very well if elixir is managed and the opponent is punished.

Key Points: The key points in this deck are the Electro Wizard and The Night Witch. Both are extremely great cards. They both cost 4 elixir yet provide insane value. Both can prevent a Hog from getting more than 2 shots on your tower. Also providing a base for counter pushes.

The goblin as well, is a really great card. At the mere cost of 2 elixir , they provide great value. Just like i always say, they are one of the most underrated cards in the card, if not the most. Their ability to take down Huge tanks and mini tanks effectively is unmatched.

The tanks in this deck are the Giant. The NW as well, is one, as she spawns bats even after dying. Tanks can be used to distract enemy troops and allow the tower to take them down effectively, much like the ice golem. This allows for a counter push to build up and this is what wins matches in this era of Clash Royale. Skill wins matches. Well, 80% of them, excluding out the ones with max cards where you have practically no chance.

This deck has 2 cards that can be used to cycle or to start the game at the back. They are Goblins and the ice Spirit. Now the ice spirit is an extremely versatile card. Combined with the electro Wizard it can take down pretty much all kinds of swarms. Even the electro wizard combined with goblins can take down Elite barbs . there are infinite possibilities. 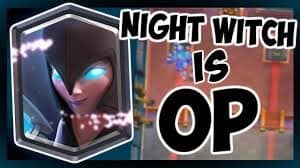 Giant + Night Witch: At the bridge- when the opponent has pumped up, quickly drop both giant and NW followed by the Miner to see the tower get demolished.

The Night Witch is overpowered. Not only does she deal massive melee damage, but also spawns bats that can deal with air units. Even when she dies, she spawns 4 bats, which can be extremely useful in pushes with the miner and bandit

Alternatively, you may drop the giant at the back to build up a strong push with the NW EWiz and the Miner. 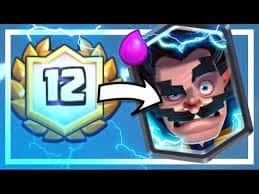 This is very effective for a quick push that will see you get some chip damage done.

The Electro Wizard is amazing. It wins you  grand challenges, with a little skill and game sense.

Recommendations: I would suggest you guys to get you Goblin’s level up. Goblins are an extremely overpowered cars that literally change the game scenarios. With a little experience one can learn to master every card in this deck.