Mini Pekka Description–“The arena is a certified butterfly-free zone. No distractions for PEKKA, only destruction.”

Mini Pekka Offensive Tactics- The mini pekka can be treated like any other  high damage card.  Because eof its relatively low amount of healy, you usually want to protect her with some sort of tank.  Common tanks to protect the mini pekka is with the barbarians or the giant.  The barbarians is a good choice because they can help kill and small swarm troops that the mini pekka may have trouble with.  This push is failry strong against ground troops but is pretty weak against the fire ball and the minion horde.  You can counter the minion horde by also adding the fire spirits in to your push.  This however does not stop your opponent from using the fire ball.  Another good offensive tank for your mini pekka is the giant.  The giant has a ton of health which can help the mini pekka easily make it to the enemy arena or crown tower.  However, the giant does not attack enemy troops so you will have to support your mini pekka with something else, maybe a bomber, so it does not get distracted by low cost, swarm troops.  Having only the barbarian and mini pekka combo or the giant and mini pekka combo is not strong but adding a second support troop will make it a lot more deadly when your opponent has to defend.

Random But Very Interesting Facts and Trivia- On February Nineth, the Chest Rewards & Card Balance Update increased the Mini P.E.K.K.A.’s hitpoints by three percent.  On May Third, the May Update allowed it to be affected by pushback.  The Mini P.E.K.K.A.’s sound effect when deployed was also changed.  Its description is a reference to the Clash of Clans P.E.K.K.A. commercial.  Even though it states that the arena is a butterfly-free zone, a butterfly can be seen flying in the Training Camp (Tutorial) picture.  It is the one of the two troops that are “miniature” versions of another troop in Clash of Clans (Mini P.E.K.K.A. – P.E.K.K.A. and Baby Dragon – Dragon).  When compared to the regular P.E.K.K.A., the Mini P.E.K.K.A. has less health, a faster deploy time, moves faster and is significantly cheaper, but its Damage per Hit and Damage per Second are similar.  On looks alone, it has a different color scheme in its picture, and also only has one eye.  On the App Store photo preview, the Mini P.E.K.K.A is portrayed as an Epic card instead of a Rare card.  One Mini P.E.K.K.A. strike does damage equivalent to an equal level Fireball. Because of this, a Mini P.E.K.K.A. one level higher than a Musketeer or a Wizard will one shot it. 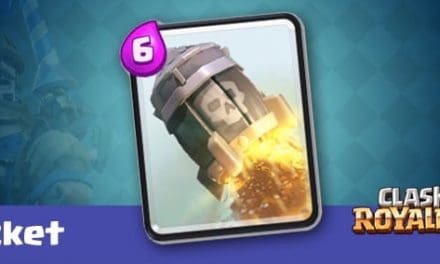