Hey guys, today we are going to talk about the Royal Ghost Mirror Challenge that was released by Supercell out of nowhere. The challenge is just like the other “New Card Testing” challenges released by supercell, where it gives the players an opportunity to play with the new card before it is actually released in the form of a semi- Grand Challenge, which includes one time rewards over and above the standard rewards based on where the players finish. What is the Super cool part about this challenge, is that the players have a chance to unlock that card, by winning the challenge. Keep in mind though, that less than 1% of the player base reaches that 12 win mark, thanks to a very smart matchmaking system, which matches players who are at a similar win level, that is, a player with 3 wins and 2 losses WILL be matched against and player with 3 wins and 2 losses. By this way it is basically a bracket tournament where players eventually get eliminated and only a very few percentage reach the top. In my opinion this is pretty fair as only the best among the rest win the challenge, especially when it is about an unreleased legendary, so as to not give it out for free. So without further ado, let’s get into the details of this challenge. 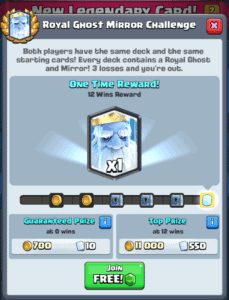 The Royal Ghost Mirror Challenge is a semi- grand challenge with 6 one time rewards, at 2,4,6,8,10 and 12 wins. The first entry is free for all and every subsequent entry costs 100 gems. At zero wins,  one is guaranteed 700 gold and 100 cards, including a rare card , and at 12 wins a player is awarded 11000 gold and 550 cards, which contains a guaranteed 55 rare cards along with 5 epic card You have 3 strikes after which you lose the challenge, and receive your prize. In every match, both players will have the same deck and the same starting hands. Every deck will contain the Royal Ghost and Mirror. This is done to prevent anyone from complaining about anything, because it is based purely on how you play every card, leaving almost nothing to chance. The cards are levelled down to tournament standards, to obviously make the playing field even, such that even a level 1 player can beat a level 13 player. At 12 wins, the player is awarded the Royal Ghost, which is a one time reward, meaning players cannot do the challenge over and over again to win more of the legendary. However, once you have unlocked it, it can be found in all kinds of chests, so buying a few Super Magicals won’t hurt if you want to level it up quickly.

Note: The above are one time rewards, which are over and above the standard rewards based on where you finish.

“Patience is the key”

I cannot stress how important it is for a player to be patient while in a match. One should never rush things in a match. Go about it slowly , thinking about the possible moves that the enemy might play, and be ready with a counter for them. If your enemy rushes things, you can take advantage of that and push hard. Remember, it ain’t over till it’s over. Go about it slowly and when you see an opening into the enemy’s defence, go ahead and push hard, but only when you have the elixir advantage and know that the enemy won’t be able to counter-push. Since you both have the same starting hand, wait for your enemy to drop something, and only after that, you react. I would advice the readers to NOT play the same card as their opponent’s, and that will only lead to stalemates and very easy for the enemy to predict you, giving him the advantage unknowingly.  It is better to play something different so that your opponent does not know what you have in your hand and thus allowing you to throw him off guard by dropping something he wasn’t expecting.

This is something that i find very important. Sometimes, actually a lot of times, everyone gets these massive losing streaks, that gets them only 1 win in such a precious challenge, where a free entry is very important, as every subsequent one will cost you a considerable amount of gems, not something which every player has. Just because of the fact that they just want to win the rewards desperately, doesn’t mean you go wild for them. This is wrong. If you lose 2 successive matches, take a break, rest and then come  back. Sometimes you just keep on losing no matter how hard you try . It is very hard to explain why but i’m 100% sure it has happened with each and every one of you. The reason for this is because our brain has a limited willpower and after a certain point your brain decides that it is best for you to not think much, because your willpower has depleted. Like mentioned above, patience is key. Nothing is achieved with rash behaviour.

The title says it all, never quit. A match consists of 3 minutes with a possibility of sudden death, also lasting 3 minutes . Out of that 3 minutes , even 10 seconds are enough for you to bounce back into the game. Clash Royale is a Tower defense game, where anything can happen, sometimes the enemy becomes overconfident and goes for the 3 crown, only to lose to you 2-1. All you need is the enemy to make a mistake, which a lot of them do, when they have the lead. No matter how behind you are, remember that it will take only 1 second for the enemy to lose connection, or a phone call on his phone to come. You always need to be optimistic. Anticipate all possible scenarios and be ready to push . Never give up. Comebacks happen and they happen very often. Just be focused and ready to take advantage . This is how you will be able to win the challenge.

That is all for this article. I Hope you guys enjoyed it, and that it will help you unlock the Royal Ghost before most. Good luck and cheers. 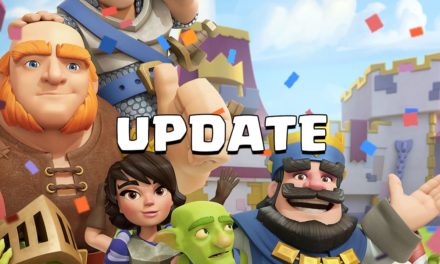 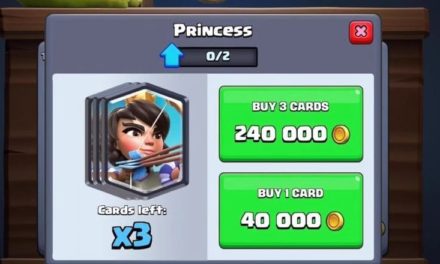 Buying Legendaries From the Shop- Is It worth it? 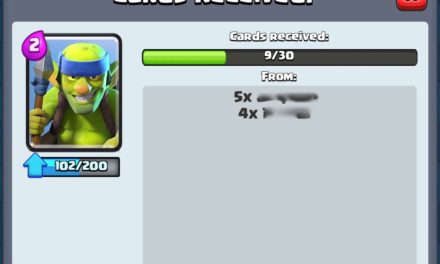 The Ins and Outs of Donating