A Guide To Build Your Perfect Deck

Are you tired of only playing the meta?  Are you tired of being called a noob or a 0 skill player because you only have OP cards?  Do you want to crush your friends in an extremely humiliating way by building your very own deck to counter theirs?  If you said yes then this is the article for you.  This article is a guide that is designed to make you own personal and perfect deck.  I will be going through all categories of cards and be giving out samples of them so you can have an idea of what a sample deck may look like.

A lead card, your main pushing and tower destroying card should be a high damage/health troop that can be walking on  the ground or flying in the air.  This card makes and breaks your pushes.  If it is not in one of your sieges, you are not expecting to do tons of damage, maybe only a bit of poke damage.  Some examples of lead cards include the golem, the prince, the lava hound, the sparky, the hog rider, the royal giant, the wizard and the mini pekka.  These are just a few of many examples for what the lead card can be.

A tower card is any building card that you can place down.  Most of the building cards cannot be used for an offensive purpose as they are short range and can only be placed on areas of the map you control.  Offensive tower buildings include the mortar and the x bow.  Because of the passive nature of tower cards, most people d not like them.  I am personally not a fan of tower cards.  However, on defense some of these towers can provide extremely good value.  For example an inferno tower can melt through tanks like the golem and the lava hound while the bomb tower can obliterate hordes of small troops.  Example of building cards are the bomb tower, the x bow, the grave stone, the barbarian hut, and the cannon cart.

Big spells are spell cards that do massive damage or have a big impact in terms of a battle.  These are not the same as small spell cards that are in charge of cleanups.  Big spell cards include the fireball, the poison spell, the graveyard, the rocket, the freeze spell, and the lightning spell.  With the rocket you can kill the three musketeers, the sparky, and other high health troops.  Bonus points if you kill those troops in addition to damaging the enemies crown tower.

The small spells in you deck make your life easier.  If the enemy spawns a minion horde you can just use the arrow card or the zap card to instantly get rid of the threat.  Additionally, you get a huge elixir advantage against your opponent.  Small spells work best against low health troops and troops in big groups. They are great against the minion hordes, the skeleton army, the goblin barrel, and other low health troops.

Having swarm troops means an easy defense.  You can punch out a ton of damage for a low cost. Use them against strong and tanky troops with huge amounts of health.  Be careful not to use them against troops like the Valkyrie, the wizard, the baby dragon, or the bomber though.  These splash damage troops will make quick work of your cluster troops. Small spells will also make you take an elixir deficit. After your cluster troops finish their job, you can start by doing a counter attack by putting your main card and start pushing with your remaining defensive cluster troops.  Cluster troops include the goblin horde, the barbarians, the guards, the skeleton army, and the bats.

In addition to your main card, you need support to make your push stronger.  Think of how much more frightening a wizard behind a golem is, a bomber behind a royal giant, a balloon behind a lava hound.  Most support troops will fill the spot your main card is missing.  You do not have damage, your support card will have damage.  You do not have slash damage, your support card will most likely be the wizard or the bomber.  Your main card is the hog rider that is vulnerable to air attacks, your supporting card will be an air targeting troop.  The list goes on and on.  Common support cards include the ice wizard, the princess, the wizard, the Valkyrie, the knight, the bomber, and the musketeer.

They are versatile and let you cycle through your deck extremely fast. They can be used for defending your base along with spells and towers or you can also do an offense support together with your main card.  These cards also reduce the average elixir cost of your deck which allows you to react quicker to your opponents moves.  Some cycle troops include the spear goblins, the goblins, the minions, the archers, the skeletons, the fire spirits, and the ice spirit.

Your elixir average cost for your deck should be between 3.0 and 4.0 elixir.  Anything beyond that cost and you should probably consider adding an elixir collector into your deck.

You should have at least two troops that attack air targets.

You should have at least one troop that is high in health.

You should have at least two splash damage troops.

You should have at least one single target troop.

You should have at least one spell. 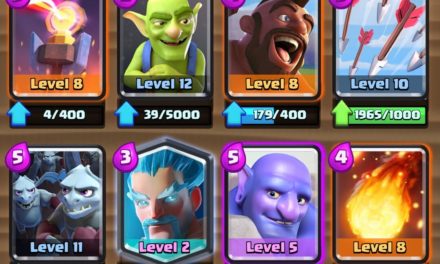